US oil production cuts in May and June could amount to at least 300,000 b/d, an increase from about 100,000 b/d of cuts projected for April, said Rystad Energy after analyzing communication from certain producers.

Eksplorasi.id – US oil production cuts in May and June could amount to at least 300,000 b/d, an increase from about 100,000 b/d of cuts projected for April, said Rystad Energy after analyzing communication from Continental Resources, Cimarex Energy, ConocoPhillips, PDC Energy, Parsley Energy, and Enerplus Corp.

Several producers have specifically mentioned production declines as a result of well shut-ins, while others did not specify whether production curtailments would come naturally as a result of a reduction in new wells put on production, or from shut-ins of already producing wells. 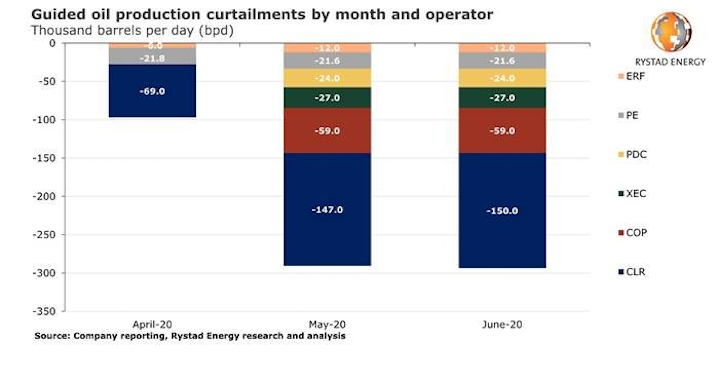 Rystad Energy currently estimates that shale producers will try to deliver on announced cuts as much as possible by reducing the number of new wells put into production. Thus, base decline could provide a material portion of the reported cut. However, given typical shale operational patterns, the decline in started jobs that began in March will result in a lower number of wells put on production in May, which ultimately will not lead to a drop in peak production until June.

Therefore, given the severity of the current market situation and the significant production curtailments announced already in April, shale producers are also likely to implement well shut-ins to bring the market into balance.

Continental Resources stands out as having taken the most drastic action thus far. About 69,000 b/d is expected to be reduced from Continental in April, followed by a cut of almost 150,000 b/d in May and June 2020. More companies are likely to follow with similar actions over the next few weeks.

ConocoPhillips said it will make significant production curtailments across its portfolio in the Lower 48. The company mentioned 125,000 boe/d of gross output will be curtailed during the month of May, estimated at 60,000 b/d of oil net to the company.

As with Continental, the Bakken play is anticipated to be one of the primary regions for production cuts. ConocoPhillips also said it would be addressing the need for production curtailments month-by-month, hinting that cuts could easily be prolonged into the future.

Cimarex Energy has elected to cut its May output by 30% or around 27,000 b/d due to the weakness in realized prices. Similarly, PDC Energy plans to reduce its May and June output by up to 30% as a result of production curtailments. The company also assumes that a certain level of reductions will be maintained in the third quarter and eliminated by the fourth quarter. The production cut for PDC Energy is thus estimated at 27,000 b/d in May and June 2020.

While Parsley has not provided a clear guidance on production curtailments over the next few months, its chief executive, Matt Gallagher, mentioned in early April that the company has begun to shut in 400 “lower-producing wells” in response to current market conditions. Rystad Energy estimates that such shut-ins could account for about 20% of Parsley output, or 22,000 b/d from April to June.

Enerplus said it started to temporarily shut in selected wells across the Williston basin. April production is expected to be modestly impacted by shut-in activity, but the company expects to shut in more production in May in response to weaker oil pricing.

“The estimated cuts from companies which have already made statements will be spread across the Lower 48 states, but production in the Williston basin will likely be affected the most. The Bakken play accounts for a high share of combined output, closely followed by Permian Delaware. Yet given the single-digit wellhead prices seen in the region recently, and overall commerciality, the shut-ins in Bakken are likely to be more pronounced,” said Veronika Akulinitseva, Rystad vice-pres. of North American shale and upstream.