China Says It’s Going to Use More Coal, With Capacity Set to Grow 19%

Eksplorasi.id – China’s coal power generation capacity will grow as much as 19 percent over the next five years even as the world’s biggest energy consumer expands use of non-fossil fuels.

While coal-fired plant capacity will increase, it will still remain below 1,100 gigawatts, National Energy Administration Chief Engineer Han Shui said Monday in a webcast posted on the agency’s website.

Non-fossil power will increase 48 percent to about 770 gigawatts over the five-year period through 2020 as total capacity expands by 31 percent to 2,000 gigawatts.

President Xi Jinping’s government is seeking to replace coal with cleaner fuels to help cut pollution that has plagued some of China’s biggest cities including Beijing, Tianjin and Shanghai. The country has said it plans to raise natural gas consumption to 10 percent of its total energy mix by 2020 from around 6 percent now.

“Coal consumption growth over the next five years is projected to be stronger than previously expected,” Helen Lau, an analyst at Argonaut Securities Asia Ltd., said by phone. “That implies that coal production must not be reduced further, otherwise, the coal market will be in deficit.”

China will need to cut about 150 gigawatts of coal-fired power from projects that are either approved for construction or already under construction to maintain the 1,100-gigawatt limit, Huang Xuenong, director of the power generation division of NEA said during the webcast. 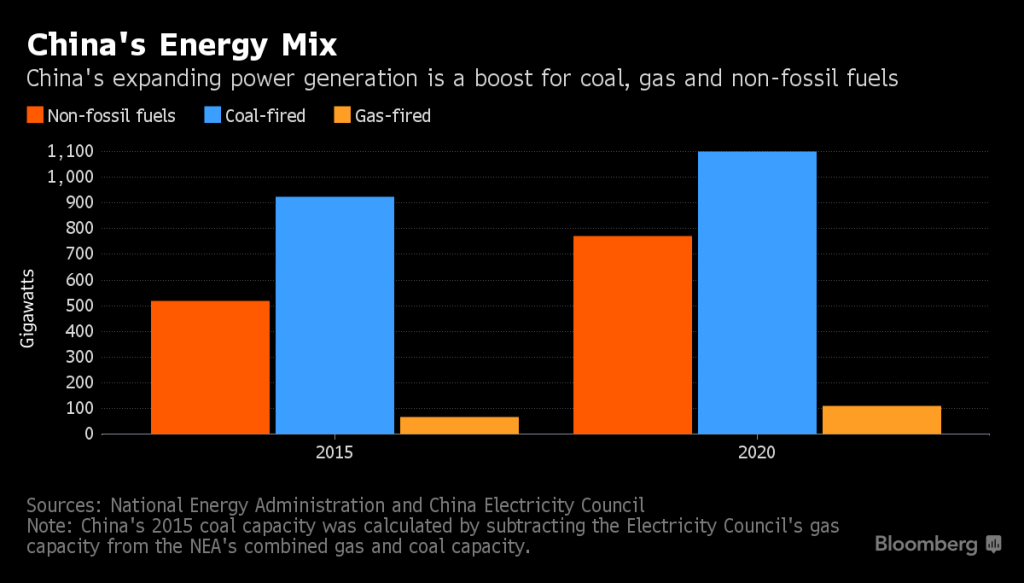 Without restrictions the country’s coal-fired power capacity could reach about 1,250 gigawatts by 2020, he said. Hydro-power will account for about 340 gigawatts of the projected 770 gigawatts of non-fossil-fuel generation capacity by 2020. Wind will make up about 210 gigawatts and nuclear power 58 gigawatts, according to the NEA.

China and the U.S., the two countries that account for 38 percent of global carbon emissions, ratified the Paris Climate Accord this year, promising to reduce carbon emissions to limit temperature increases.