Eksplorasi.id – The $149 billion pipeline to expand the world’s copper supply is running into trouble. Producers are counting on expansions and the development of new operations to meet supply shortages they forecast arriving toward the end of the decade.

The plans are fraying as reluctant lenders, political wrangling, technical obstacles and a lack of water and electricity push back project deadlines from Papua New Guinea to Peru. 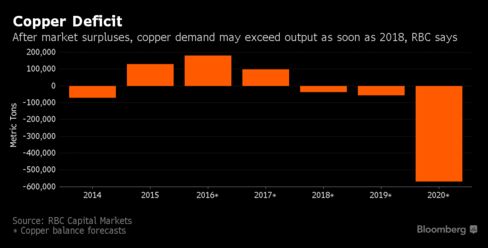 Only six major projects to build new mines or expand existing operations will be completed by 2020, with two of that total still at risk of potential delays, according to researcher CRU Group. That compares with a global slate of about 80 planned developments, according to Bloomberg Intelligence.

Freeport-McMoRan Inc., the largest publicly listed copper producer, forecasts an end to the metal’s current surplus from next year as demand improves and output drops. Chile’s state-owned Codelco, the top producer, is predicting a deficit by 2018, while BHP Billiton Ltd., operator of the world’s biggest copper mine, sees a shortage from 2019.

“Our project pipeline has thinned considerably over the last year as we have factored in further delays,” said Christine Meilton, principal consultant on copper supply and raw materials at CRU in London. While the industry is confident about an emerging deficit, it remains difficult to raise finance for projects as low prices deter investors, she said.

Global production exceeded demand in five of the past six years, partly because of slower growth in China, the biggest user, data by Bloomberg Intelligence show. Copper has tumbled more than 50 percent on the London Metal Exchange from a record $10,190 a metric ton in 2011, touching close to a seven-year low of $4,318 a ton in January.

As a result, capital spending by 35 major producers will shrink to about $41 billion next year, down from $104 billion in 2013, and mine output last year tumbled by more than 20 percent, company data compiled by Bloomberg Intelligence show. Even with a project pipeline with forecast capital expenditure of about $149.4 billion, according to the data, the mining industry faces challenges to deliver new supply in time to meet the deficit.

Rio Tinto Group’s $5.8 billion expansion of Mongolia’s Oyu Tolgoi won’t be completed until 2027, while BHP, the world’s largest mining company, says it will be “a little bit late to the party,” under a plan for a major expansion at Australia’s largest copper mine from about 2025, the site’s asset president, Jacqui McGill, said in May.

“The mid-2020s is when we are targeting,” Justin Bauer, BHP’s head of resource planning and development for Olympic Dam, said in an interview at an Adelaide laboratory where the producer is testing processing technology. “We’d like to find a way to expand it, and find a viable way for quite a large expansion, a cheaper way of processing ore is a really important step for us.”

About 25 global copper projects have been delayed by up to two years, a further 21 for as long as four years and about nine developments face hold-ups of between four and six years, Codelco said in a presentation to a Florida conference earlier this year.

Codelco’s plan to covert the Chuquicamata pit in Chile into an underground mine, a program the company said in May was about 29 percent complete, is among projects CRU sees at risk of delays beyond this decade. Targets for First Quantum Minerals Ltd.’s mine in Panama are also considered under doubt, according to CRU. First Quantum, which forecasts a rise in production at its Cobre Panama site from 2018, didn’t respond to a request for comment.

Projects on track to deliver at least 100,000 tons a year of new supply by 2020 are Qulong in China’s western Tibet Autonomous Region, Southern Copper Corp.’s Toquepala in Peru, Freeport’s expansion at Indonesia’s Grasberg and Myanmar’s Monywa Letpadaung operation, according to CRU. 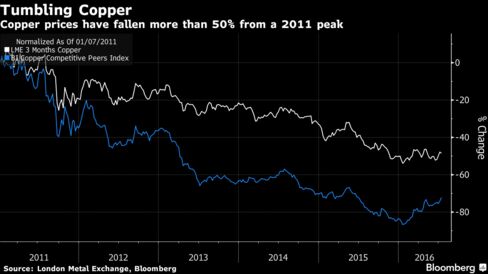 Copper demand was weaker than expected in the first four months of 2016 and slower growth in consumption poses risks to forecasts on both the market balance and prices, RBC Capital Markets analysts wrote in a June 9 note. A deceleration in global growth, in particular in China, remains the key risk to the demand outlook, the analysts wrote. The country accounted for 47 percent of global consumption last year.

Still, any new disruptions to projects could deliver a deficit earlier than predicted, CRU’s Meilton said in an e-mail. “It will also have implications for the next decade, when the supply gap is expected to widen,” she said.

That’s why OZ Minerals Ltd. is accelerating work on a A$975 million ($728 million) project in Australia, seeking to deliver new output in 2019, according to Chief Executive Officer Andrew Cole. “When you realize the copper price is high it’s too late, you’ve missed the boat,” Cole told the Sydney Mining Club in a June 2 speech.