Newmont, Barrick Agree More on Present Than Future Value of Mine

Eksplorasi.id – A split between the world’s two largest gold producers over the value of their jointly owned Australian mine is more about future economic expectations than what’s in the ground.

That’s the view of Newmont Mining Corp.’s Gary Goldberg, who has been saying for over a year he’d be interested in buying Barrick Gold Corp.’s half of the Kalgoorlie Super Pit — at the right price. Since Barrick officially started a sales process of the 50 percent stake in July, a wide field of potential bidders is said to have formed to vie with Newmont for the stake in Australia’s largest open-pit gold mine.

“We’re not misaligned in terms of where we see some of the value of the resource that’s there,” Newmont’s chief executive officer said in an interview with Bloomberg TV Canada. “But people have different assumptions on exchange rates, and gold price, those sorts of things.”

Gold has been on a wild ride this year. After the largest first-half increase in almost four decades, futures have toppled as speculation increases that the U.S. will raise interest rates, curbing the appeal of the metal as a store of value. The Australian dollar has been similarly choppy, strengthening against the greenback in the first and third quarters and weakening in the second quarter. 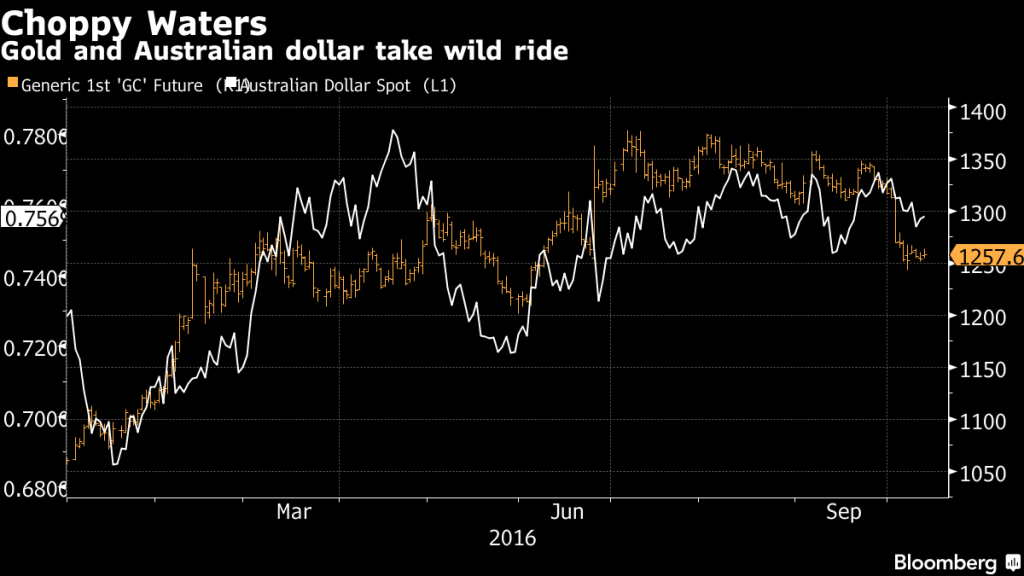 The surge in gold prices this year comes after three straight annual declines. That prompted gold miners to cut costs, delay projects and sell assets, creating a situation for many large miners in which maintaining future levels of production is more difficult.

Both Greenwood Village, Colorado-based Newmont, which operates Kalgoorlie, and Toronto-based Barrick have declined to say how much they think the 50 percent stake is worth, and observers’ views have varied. The sale may fetch as much as $1 billion, people familiar with the matter said in July, while analyst valuations have ranged from $400 million to about $1.5 billion.

‘Any Structure’
Barrick is considering various ways to structure the sale, people with knowledge of the matter said last week, including selling shares in the holding company that owns the mine.

That could avoid triggering Newmont’s Right of First Refusal on the sale, which allows the U.S. miner to supplant any bid. Goldberg confirmed Barrick could structure the transaction as a share sale, but said that could have implications for buyers. “Does it make sense to a future buyer who’s got less flexibility when you buy it at that level, around things like depreciation and tax?”

“We are prepared to consider any structure that makes sense, Andy Lloyd, a Barrick spokesman, said Friday in an e-mailed comment on the sale of its Kalgoorlie stake.

Newmont’s agreement to operate Kalgoorlie expires in 2020. Since taking over the mine’s operation in May 2015, it has cut costs by 30 percent and boosted production 20 percent year-over-year, Goldberg said.

‘The Most Sense’
Asked if Newmont would want to retain ownership of its half of the mine if a new partner wanted to operate it, Goldberg said the company would decide at the time. “We’d like to follow the path that makes the most sense from a value standpoint,” he said. “Ultimately I do think that’s us operating it but we’ll just have to see.”

Newmont expects its share of Kalgoorlie’s gold production this year to be 350,000 to 400,000 ounces, so adding Barrick’s half would narrow the gap that has allowed Barrick to claim the title of the world’s largest producer. The gap has been shrinking as Newmont brought new production on stream and Barrick sold assets.

Earlier this month, Newmont’s Merian mine in Suriname achieved commercial production after it was built at a cost 20 percent below initial capital estimates. Meanwhile, the Long Canyon mine in Nevada is ahead of schedule and could begin producing gold before the end of the year, Goldberg said.

Overtaking Barrick isn’t a priority, Goldberg stressed. “We’re not about getting bigger but growing margins, which we do by getting costs down and efficiencies up.” 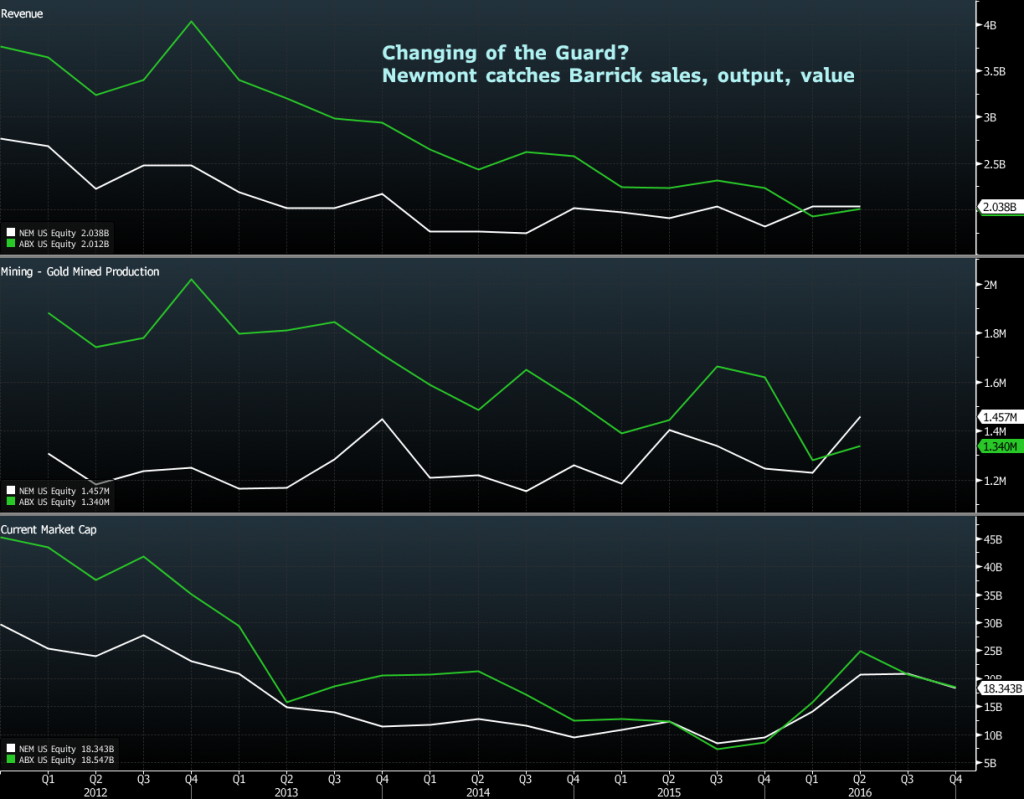 Newmont, which has operations in the Americas, the Asia-Pacific region and Africa, has been working to lower costs and increase production as gold fell from an all-time high reached in 2011. The company expanded through the down cycle by investing in its operations and buying the Cripple Creek and Victor mine in Colorado for $820 million last year.

Under Goldberg, Newmont has also sold assets, including the Batu Hijau copper-and-gold mine in Indonesia. The CEO said Thursday he’s hopeful that deal, which involves multiple parties, will close in “the next couple of weeks,” noting the ownership arrangement is “complex.”

The sale will provide the company with $920 million in cash, which will be used toward a combination of debt repayment, new projects and dividend increases. The company has repaid $1.1 billion of debt so far this year and has already met its target ratio of one in terms of net debt to earnings before interest, depreciation and amortization.

‘Down Slightly’
“We may adjust that down slightly but generally I’m pretty comfortable with where our debt levels are,” Goldberg said. The company also has $6 billion in liquidity, half of which is cash and half in an undrawn revolver, he said.

Since gold averaged more than $1,300 an ounce in the third quarter, the corporate dividend will automatically increase because it’s tied to bullion prices, Goldberg said.

On top of that, Newmont’s board will decide before third-quarter earnings are released Oct. 26 whether to increase the percentage of free cash flow allocated to the quarterly dividend. Increasing the so called “payout ratio” makes sense as long as gold prices stay above $1,000 an ounce, Goldberg said, because the company’s efforts to cut costs and boost efficiencies have helped give it more “headroom.”

“We look out the next three to five years when we set the dividend policy,” he said. “We’re not tied into what’s going on in the market, we’re really tied into what the business can deliver at different market conditions.”

As $100 Billion Goal Crumbles, Caterpillar Shakes Up Its C-Suite