Eksplorasi.id – Stresses among Singapore’s oil and gas companies are deepening, the head of Southeast Asia’s second-largest lender said, signaling that more firms grappling with the slump in energy prices may face difficulties repaying their debts.

“I don’t think the oil and gas sector is in a situation where it is in a recovery mode yet, and continues to be under stress,” Oversea-Chinese Banking Corp. Chief Executive Officer Samuel Tsien told reporters at a briefing Thursday. “I think the fourth quarter of this year will continue to be a difficult quarter for this sector.”

OCBC had earlier reported a 10 percent jump in provisions for soured assets for the third quarter, taking some of the gloss off the better-than-estimated profit the lender announced for the period. Its nonperforming assets surged 34 percent to S$2.59 billion ($1.9 billion) by September from a year earlier, driven by loans to oil and gas services firms that had soured, the bank said in a statement.

More Singaporean companies tied to that industry are facing difficulties repaying debt as demand for their services falls amid lower exploration activity. Swissco Holdings Ltd., which supplies rigs and support vessels to oil and gas explorers, signaled last week that it may face default, due to its failure to pay interest due earlier this month. Companies including KS Energy Ltd. and AusGroup Ltd. have sought more lenient repayment conditions from their debt holders. 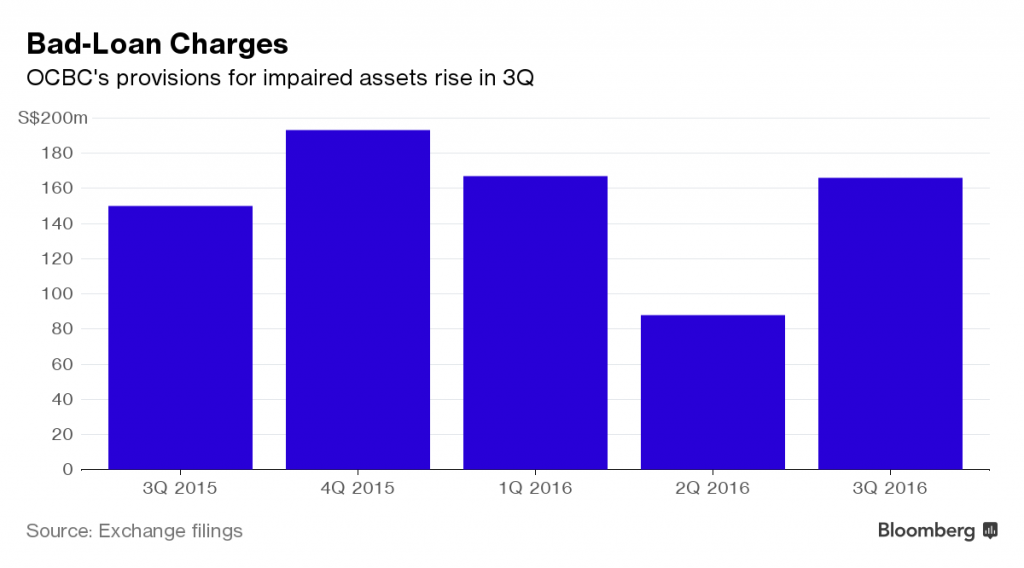 Tsien did provide one positive signal for the industry: since the third quarter of last year, the bank hadn’t seen any new companies emerging as “distressed names,” he said.

“The problem in the oil and gas sector for our portfolio has not broadened but has deepened, with those companies that are under stress continuing to be under stress,” Tsien said.

The travails in the energy industry and a weak regional economy made it “difficult” to call a peak for nonperforming assets, Tsien said, adding that the bank will need to monitor the situation for another quarter.

OCBC was the first of Singapore’s three large banks to report quarterly profit. United Overseas Bank Ltd. is due to post its results on Friday, while earnings from DBS Group Holdings Ltd., Southeast Asia’s largest lender, are scheduled for Oct. 31.

OCBC shares rose 0.1 percent to S$8.56 as of 12:44 p.m. in Singapore. The stock has dropped 2.8 percent this year, on course for its second straight annual decline.

OPEC May Need Help to End the Global Glut of Oil