Eksplorasi.id – The minimal impact on oil prices from a global deal on record output cuts showed that oil producers have a mountain to climb if they are to restore market balance as the coronavirus shreds demand and sends stockpiles soaring, industry watchers said.

A day after the Organization of the Petroleum Exporting Countries (OPEC) and allies led by Russia agreed to reduce output by 9.7 million barrels per day (bpd) in May and June – equal to nearly 10% of global supply – prices barely moved, oscillating in and out of positive and negative territory. [O/R]

Both Brent LCOc1 and WTI CLc1 have lost more than half of their value this year. 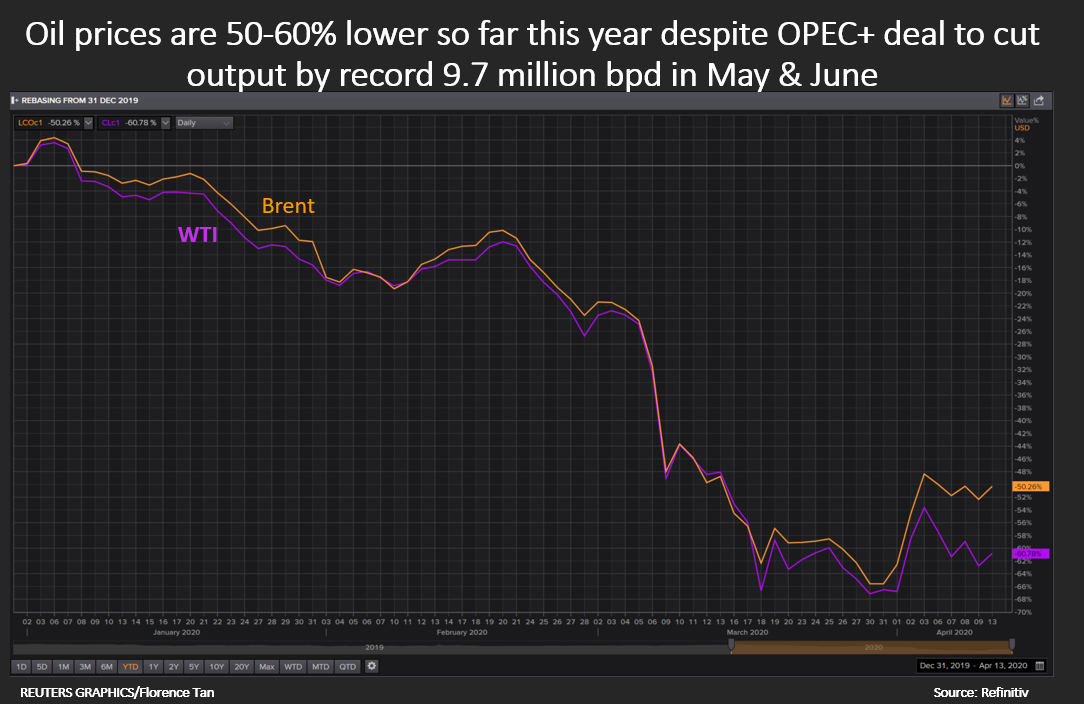 The cut by OPEC+ may be more than four times deeper than the previous record set in 2008 and overall oil supply may shrink by twice that with other measures, but the reduction remains dwarfed by a demand drop predicted by some forecasters to be as much as 30 million bpd in April.

“Even if these cuts provide a floor to prices they will not be able to boost prices given the scale of inventory builds we are still staring at,” Energy Aspects analyst Virendra Chauhan said, referring to fast-filling storage amid the slide in demand from end-users.

“The absence of hard commitments from the United States or other G20 members is (a) shortcoming of the deal.”

Saudi Energy Minister Prince Abdulaziz bin Salman said that G20 nations had pledged to cut about 3.7 million bpd and that strategic reserves purchases would reach roughly 200 million barrels over the next couple of months, bringing the total reduction of oil in the market to about 19.5 million bpd.

But big producers such as Canada, Norway and the United States have yet to commit publicly to fixed quotas.

“The deal failed to reach the reduction levels anticipated by the market,” Takashi Tsukioka, president of the Petroleum Association of Japan (PAJ), said in a statement.

“We hope OPEC+ will continue their talks to stabilise oil markets,” he said.

Meanwhile analysts said that while the core number in the deal suggests a near 10 million bpd cut, Middle East producers such as Saudi Arabia, the United Arab Emirates and Kuwait may have to reduce by more than the 23% cut to which they signed up. 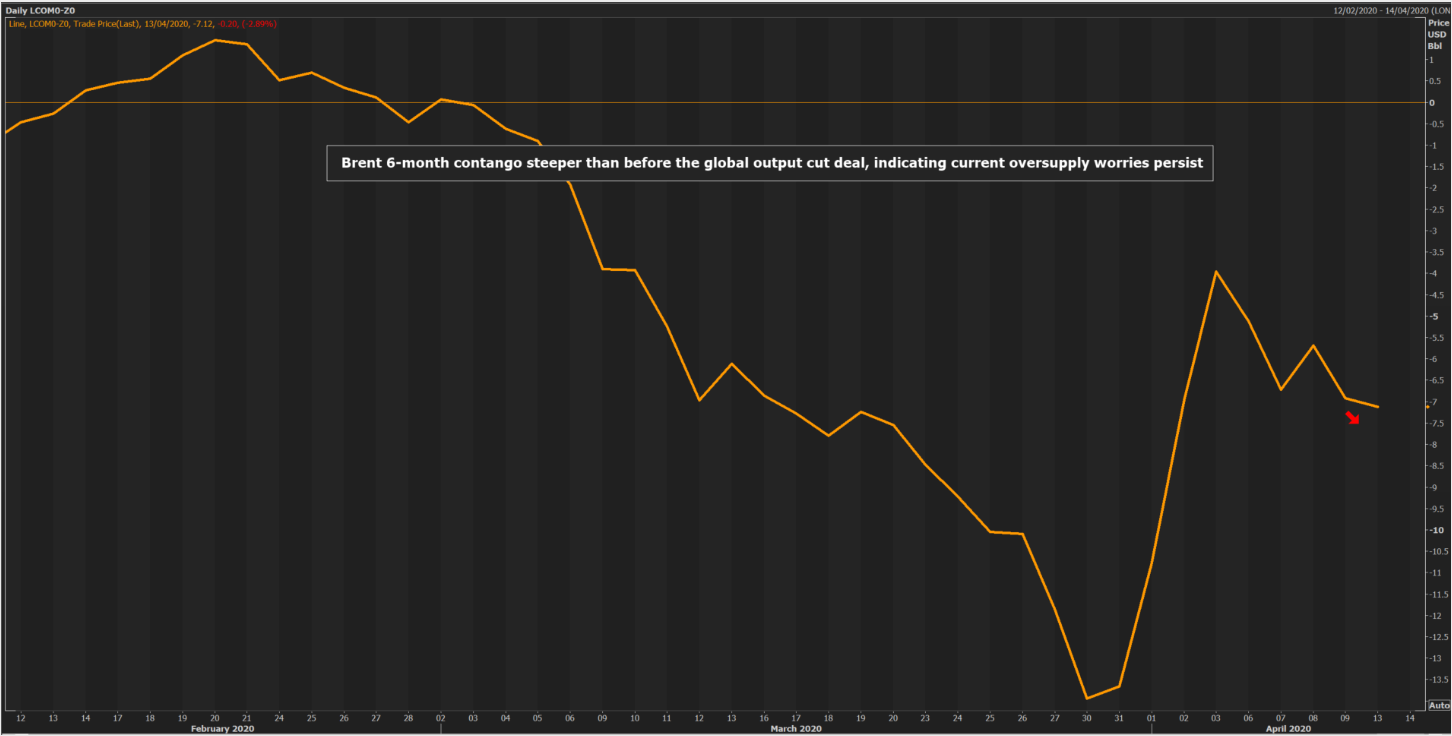 FOCUS ON RESERVES
However, energy analysts at FGE expect oil stockpiles in developed nations to grow in the second quarter to levels last seen in 1982.

The Brent futures contango, a market structure whereby future prices are higher than those in the nearer term, deepened on Monday, for both a six-month horizon LCOc1-LCOc7 and for a year ahead. LCOc1-LCOc13 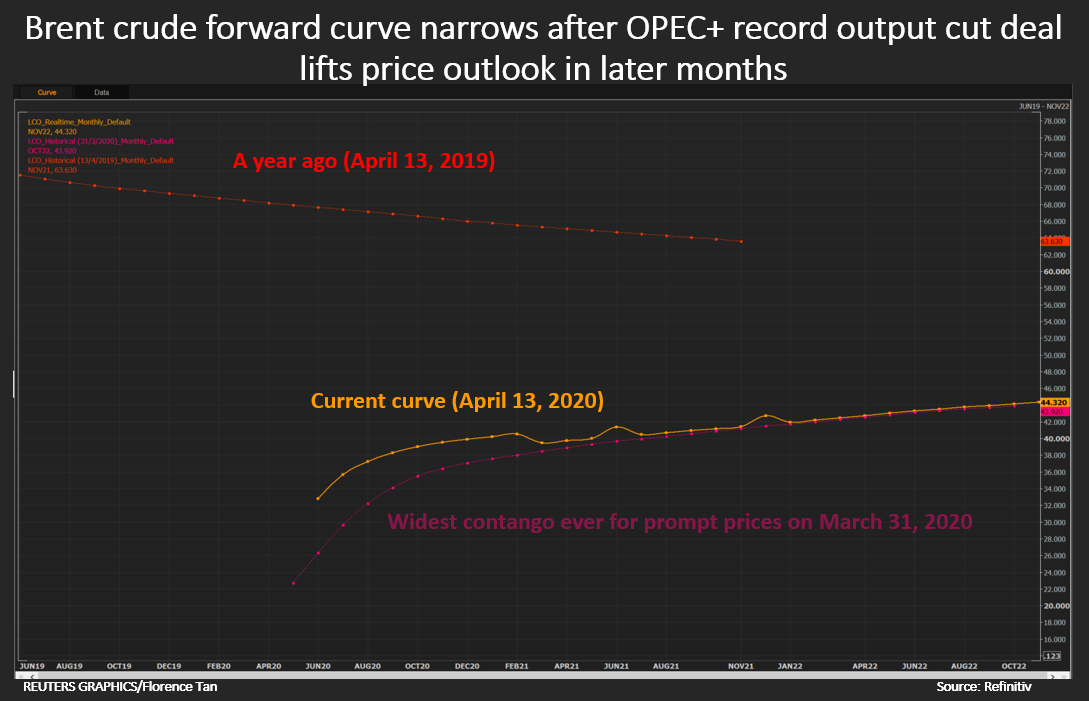 “(But) as a result of the production cuts, the global oil market will have the largest spare capacity in at least a decade, leading to a flatter Brent crude oil curve,” Bank of America analysts said.

The next major focus for markets will be numbers from the U.S. Department of Energy on its strategic petroleum reserves (SPR).

A veteran Singapore oil trader, who declined to be named due to company policy, said that inventory build will continue, albeit at slower pace because of the OPEC+ pact. Saudi Arabia cut its crude selling prices to Asia on Monday, while lifting prices for the United States and leaving prices to Europe unchanged.

“Most of the SPR (held by countries around the world) are pretty full already. Probably China still has some room, but the rest, I doubt there is anything significant,” he added.

Highlighting the scarcity of available storage capacity, Australia’s Energy and Emissions Reduction Minister Angus Taylor on Monday said that the country is working on an agreement to buy oil and store it with the U.S. strategic reserves.

China, the world’s largest oil importer, remains the outlier. Its refiners are set to raise crude oil throughput this month by 10% from March as the country where the coronavirus originated recovers from the outbreak faster than elsewhere.

“Outside the government reserve stockpiling, which is highly guarded information, commercial reserve managers at national oil firms will only look at the economics and tankage space available to decide purchases,” said the official, referring to commercial reserve departments under state refiner Sinopec and PetroChina.

These centres operate independently from the SPR, the official said, and often act as a swing supplier to state oil refineries by loaning crude to plants at a higher price and making a profit when retrieving them at a lower cost.

“China … will ultimately be constrained given this is a demand, not supply-led issue,” said Energy Aspects analyst Chauhan.