Eksplorasi.id – Singapore, which is vying to become a regional center for the trading of liquefied natural gas in Asia, picked Royal Dutch Shell Plc and Pavilion Gas Pte Ltd. as its next suppliers of the fuel.

The companies will have exclusive rights to sell 1 million metric tons of LNG annually for up to 3 years, with imports beginning in 2017, the city-state’s Energy Market Authority said in a statement.

The country will also consider spot purchases of the supercooled fuel and piped natural gas on a case-by-case basis, S. Iswaran, the Minister of Industry, said at the Singapore International Energy Week conference on Monday.

Singapore wants to use its geography and stature as Asia’s oil-trading center to also be a leader in LNG in a region that accounted for more than 70 percent of global demand in 2015.

The nation has built a receiving terminal while the state-owned investment company set up Pavilion Energy Pte in 2013 to trade the fuel. It’s drawn firms from Glencore Plc and GAIL India Ltd. to open trading desks in the country, and Singapore Exchange Ltd. has started futures and swaps linked to an index of spot LNG prices.

Shell and Pavilion were chosen because they “offered flexible and competitive pricing not just indexed to oil but to different options on the table,” Iswaran said. “One of the considerations in looking at the next tranche was the offering of flexibility in terms of price indexation. And indeed they have put forward some flexible options, and end-users have responded to these offers.”

The exclusive licenses will expire either after three years or if the companies import more than 1 million tons in a year, according to a statement from the Energy Market Authority.

Beyond that the companies will still be able to import LNG into Singapore but will not be guaranteed exclusivity, Darius Lim, a Pavilion spokesman, said by e-mail. 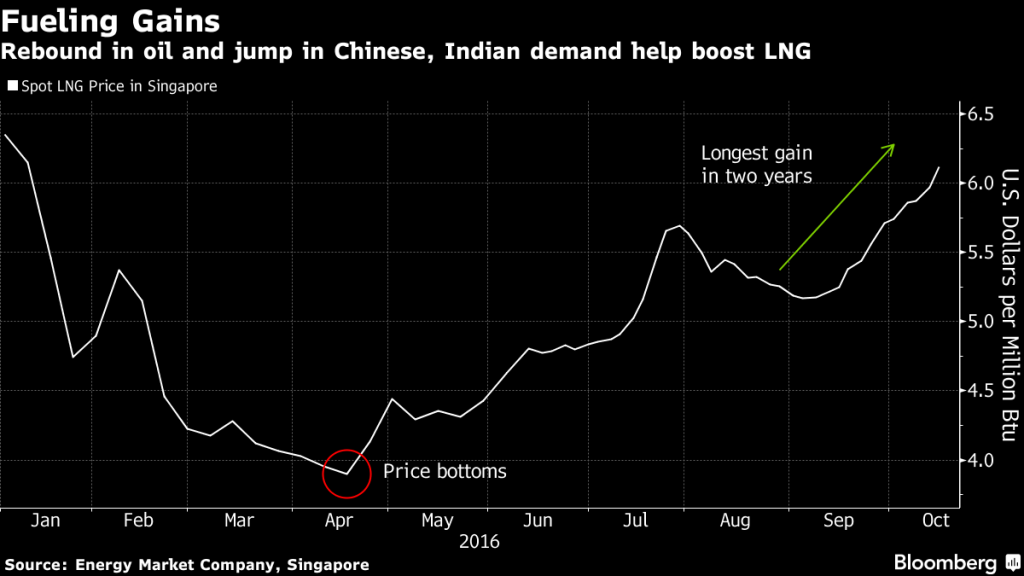 Natural gas can be cooled and liquefied to transport it on tankers between areas difficult to link by pipeline. LNG traded in Asia — where sellers such as Qatar and Indonesia ship fuel to buyers including Japan or China — has traditionally been pegged to crude prices.

That’s because the region lacks a benchmark similar to Henry Hub in the U.S., which the country’s burgeoning LNG exporters use in sales contracts.

Demand Surge
A previous contract to supply LNG to Singapore was won by BG Group Plc. The company was acquired by Shell in February. Under that deal, BG was to supply 3 million tons of LNG annually over 10 years starting in 2013.

The island nation, which generates 95.5 percent of its electricity using natural gas, imported 1.2 million metric tons of LNG last year, a drop of 14 percent from 2014 because of lower power demand, according to Bloomberg New Energy Finance.

LNG consumption may rise to more than 3 million tons annually from 2022, and surge to 11 million tons a year by 2030 as its contracts to receive natural gas via pipeline from Malaysia and Indonesia expire, BNEF analysts including Maggie Kuang said in a June 9 report.

Annual imports of LNG in Southeast Asia totaled 3.8 million tons in 2015, and is expected to jump to 16.8 million tons by 2020, with growth accelerating even more thereafter as national resources are depleted, according to BNEF. By 2030, total LNG demand in the region will reach more than 50 million tons a year.

Changing Market
The plunge in commodity prices over the past two years has prompted changes in the LNG market, allowing for an expansion of the spot market as some buyers seek to resell shipments and the fuel’s price relationship with oil is weakened.

“Singapore will carry out a consultation starting this quarter on spot LNG imports,” Iswaran said. “Our hope is that we should be able to get something moving on this next year.”

Singapore is home to more than 25 LNG trading desks and its estimated that about 2,000 cargoes transit near the country each year. Singapore LNG Corp., which operates the city-state’s first receiving terminal, has three storage tanks at its Jurong Island facility. Spot LNG in Singapore rose to $6.119 per million British thermal units last week, climbing to trade above $6 for the first time since January.